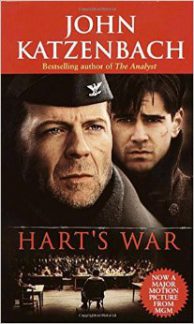 Second Lieutenant Tommy Hart, a navigator whose B-25 was shot out of the sky in 1942, is burdened with guilt as the only surviving member of his crew. Now he is just another POW at the fiercely guarded Stalag Luft 13 in Bavaria.

Then routine comes to a halt with the arrival of a new prisoner: First Lieutenant Lincoln Scott, an African American Tuskegee airman who instantly becomes the target of contempt from his fellow soldiers. When a prisoner is brutally murdered, and all the blood-soaked evidence points to Scott, Hart is tapped to defend the soldier. In a trial rife with racial tension and raw conflict, where the lines between ally and enemy blur, there are those with their own secret motives, and a burning passion for a rush to judgment, no matter what the cost.